For their innovative projects that raise the bar for corporate responsibility in the Canadian mining sector, Syncrude Canada and IAMGOLD Corporation were recognized with inaugural TSM Awards on May 12 at the Canadian Institute of Mining, Metallurgy and Petroleum (CIM) Awards Gala in Vancouver.

A total of 25 nominations were submitted by mining companies that participate in the TSM initiative. The selection committee, comprised of members from MAC’s independent national community of interest (i.e. stakeholder) advisory panel, selected the finalists based on criteria such as innovation, involvement of and engagement with communities, and project outcomes. TSM performance was also considered as an indicator of the company’s ongoing commitment to corporate responsibility. 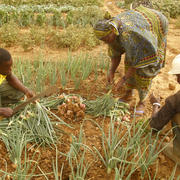 In the Sahel region of Burkina Faso, home to IAMGOLD’s Essakane gold mine, the climate is desert-like, often reaching 45 ̊ C with very little rainfall. Populations largely rely on livestock breeding and gold mining for their livelihoods. To improve security and combat poverty in the region, IAMGOLD committed to develop alternate revenue sources for communities living near the mine site.

Working with communities of interest, market gardening emerged as an opportunity to broaden revenue sources, while at the same time improve food security and nutrition. In 2009, 100 women from the relocated 500-member Marganta community adopted the practice using a solar-powered well and water storage system provided by IAMGOLD. This innovation has greatly lightened the women’s workload and has allowed them to water garden beds without worrying about a lack of water. Two years later, drip irrigation technology was added, which has helped increase production without increasing water use. Vegetables can now be cultivated year-round, increasing the number of harvests to two to three per year instead of just one. Since 2009, nearly 400 producers (more than 50% women) have earned additional revenue through market gardening, and many have doubled their annual income. What’s more, there has been an increase in people choosing gardening over gold panning. The project’s success has also generated much interest by neighbouring villages and other mining companies who would like to replicate it in other regions. 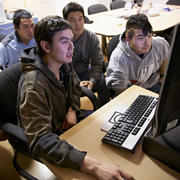 Situated in the Nunavik territory of Northern Quebec, Glencore Canada’s Raglan mine has made it a priority to attract and retain as many local Inuit employees as possible. To achieve this goal, Glencore launched its Tamatumani program in 2008, meaning “second start” in Inuktitut, which has helped the company increase Inuit employees by 170% and reach a retention rate of 80%. Built in collaboration with community partners, the program encourages career development of Inuit employees, provides technical training and basic skills training, and supports the integration of new Inuit staff. As part of the initiative, the company created the Inuit Employment Centre, which manages the entire staffing process, maintains a bank of candidates interested in working at the mine and visits Nunavik communities to ensure residents are aware of available positions.

In 2013, Glencore created a new program called RIDE (Rapid Inuit Development and Employment) to complement the Tamatumani program to encourage internal mobility for Inuit employees with high potential. The RIDE program provides personal career development plans, and has developed partnerships with educational institutions to offer Inuit students scholarships, summer jobs and internships. Since the founding of the program, 85 positions have been created for Inuit workers for nearly 30 different types of jobs. 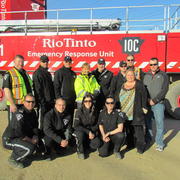 The region of Labrador West – comprised of Labrador City and Wabush – is a good example of how mining can create modern towns. As towns develop and grow, however, they can experience pressures like rising housing and transportation costs, a lack of social services and infrastructure, and difficulty in attracting and retaining skilled employees.

In 2006, the Iron Ore Company of Canada (IOC), a division of Rio Tinto, sought to address some of these pressures by establishing a Community Advisory Panel – a grassroots group that acts as a consultative forum for the company. Originally intended to focus on only on Labrador City, IOC decided to broaden the Panel’s scope to cover the entire Labrador West region in light of rapid growth resulting from development in the Labrador Trough. The Panel is currently co-chaired by IOC and Cliffs Natural Resources, and meets regularly to share information and develop solutions that will benefit local communities. In 2012, IOC took one step further by creating a Regional Task Force to complement the Panel’s efforts. The taskforce can escalate issues to the government when needed and includes senior executives from IOC, Cliffs Natural Resources and other mining companies, along with senior municipal and provincial government officials. Together, these groups have generated positive results for the region, including advocating for affordable housing, working to ensure the region has appropriate health and emergency services and community infrastructure, and partnering with colleges to improve education and training opportunities. 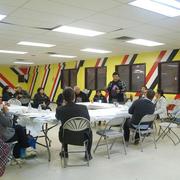 Established as a mining community in the late 1950s, the City of Thompson has become a regional service hub and gateway to Northern Manitoba. However, economic volatility and the fact that Vale will reduce its operations with the closure of its smelter and refinery by 2015 have underlined the need to broaden and diversify the area’s economic base.

Five years in advance of the partial decommissioning, Vale proactively engaged and fully-funded rePlan to co-launch the Thompson Economic Diversification Working Group (TEDWG), which developed action plans for economic development and diversification over the project’s two-year lifespan. The group was highly collaborative, involving representatives from the Keewatin Tribal Council, Manitoba Keewatinowi Okimakanak, Nisichawayasihk Cree Nation, the City of Thompson, the Manitoba Métis Federation, Thompson Chamber of Commerce, and others. Communities helped to set all of the group’s priorities, which were focused on addressing economic, social, educational and health aspects and barriers. The group’s actions plans have now transitioned to community groups and stakeholder organizations for implementation. The process represents unprecedented levels of community and stakeholder engagement funded entirely by a mining company nearly five years in advance of a partial decommissioning project to ensure sustainable economic development in the community. 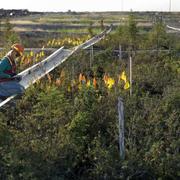 In the boreal forests of Northern Alberta where Syncrude has a large oil sands mining operation, fen wetlands are commonplace and, in nature, can take thousands of years to establish. This peat-forming, groundwater-fed wetland became Syncrude’s source of inspiration as it looked to transform a tailings structure into a thriving wetland in 2007.

With very little information on fen reclamation to refer to, Syncrude established the interdisciplinary Sandhill Fen Technical Advisory Panel to create something that had never been done before, and the Sandhill Fen Research Watershed Initiative was born. The watershed was developed on 52 hectares of sand-capped soft tailings on a portion of what was once a 60-metre deep mine. In all, more than 28 kinds of wetland plants were introduced and vegetation was selected to mirror those in naturally-occurring fens in the area. Construction of the watershed was completed in 2012 and will be closely monitored over the next 10 to 20 years. This project is still in its early years, but results are extremely encouraging. For example, peat studies show that it is possible to transplant live peat from a natural environment and grow it in a newly- constructed area. Additionally, a number of native plants have successfully taken seed and are growing on their own without having been planted. The information being gathered is invaluable towards improving wetland reclamation best practices for Syncrude and the oil sands industry as a whole. 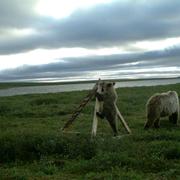 In response to interest to track regional grizzly bear trends, Dominion Diamond Corporation’s Ekati mine and Rio Tinto’s Diavik mine established the Grizzly Bear DNA program in the Northwest Territories in 2012. The large-scale study encompasses a 16,000 km area around the two diamond operations and will help determine if mine-related activities influence the relative abundance and distribution of grizzly bears over time.

Hair samples are collected and submitted for DNA analysis. The compilation of results in consecutive years will help provide an accurate snapshot of the baseline population study area. The program will be repeated every three years to compare population levels with this baseline to identify trends, such as population growth/decline, size of home range and emigration/immigration of new animals. This project, which combines scientific research and traditional knowledge, is the largest grizzly bear DNA program in the territory. It was also the first major collaboration between diamond mines in the region. Since the Ekati and Diavik mines started this program, De Beers is also conducting Grizzly Bear DNA programs at the Snap Lake Mine and Gahcho Kué Project. 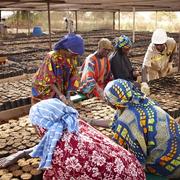 The populations around IAMGOLD’s Essakane mine in the semi-desert Sahel region of Burkina Faso are dependent on trees for firewood, food, feed for livestock and traditional medicine. With trees having to be removed to construct the mine, IAMGOLD launched a reforestation program in 2009 to compensate for the loss to local biodiversity and made a goal of 100,000 living trees by the time it ceases operations. The project emerged directly from exchanges with the local community, and residents were involved from the planning stage through to implementation. To ensure that the plantations flourished, IAMGOLD trained groups of women in nursery techniques. The program demonstrates the positive outcomes that can result from a mining company and communities working together, with the initiative’s success largely attributed to its participatory and community-driven process.

Since the program began, more than 200,000 trees have been planted. Forest areas when the mine ceases operation are expected to be comparable or superior in terms of size, quality and function to those existing on the mining site prior to construction. There is also expected to be a 30% increase in the number of trees considered threatened, rare, endangered or protected in the project zone.

Tracking real-time water quality for communities in Newfoundland and Labrador 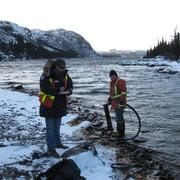 Managing risks to waterways is critical to mining operations and the communities that rely on them. Vale’s Voisey’s Bay operation in Newfoundland and Labrador, in partnership with the provincial government, set an industry best practice through the Real Time Water Quality (RTWQ) Monitoring Partnership – a program that provides near real-time (four hour delay) information on water quality of various streams within the vicinity of the mine and mill.

Through this project, water quality data is uploaded via satellite link from four solar-powered stations and can be read online by the public. The information is used by community members to enhance traditional knowledge as the water stage, flow measurements and water temperature can help predict the migration patterns of Arctic Char. Moreover, the provincial government can use the data to inform regulation development, when necessary, and aid in site-specific risk assessments. In 2003, Vale was the first industry partner to sign on to the RTWQ. In 2012, the partnership was extended with Vale providing more funding and equipment to the program. Data is available since the beginning of mining activities in the area and, in 2012, Vale and the provincial government committed to conducting a thorough review of all years of data.