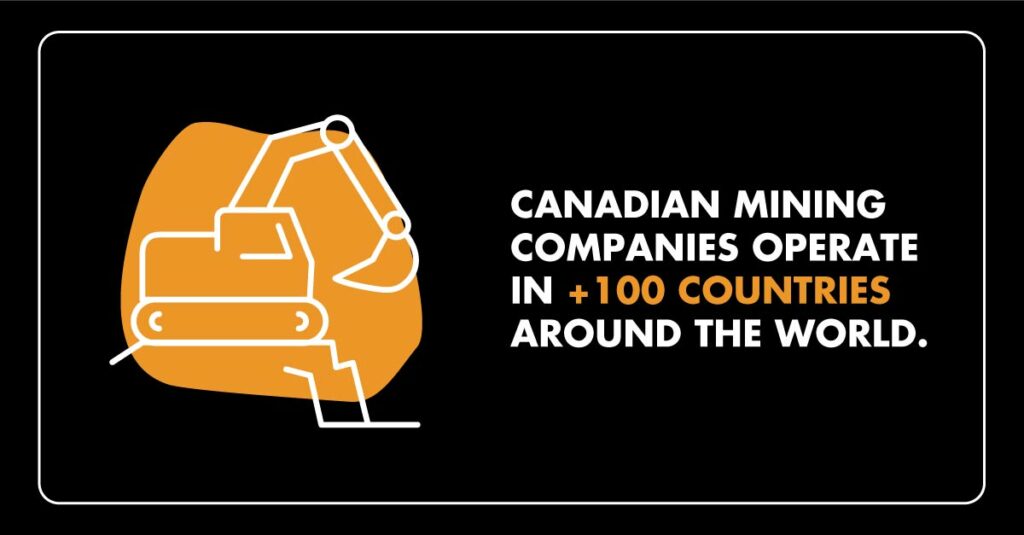 Canadian mining companies operate in more than 100 countries around the world, making it one of the few sectors of the Canadian economy that can call itself a global leader. Canadian mining investment overseas generates significant economic contributions to host countries and communities, helping to raise living standards and eradicating poverty where they operate.

Over the past several years, MAC has increased its work in the international development space. From 2012 to 2014, MAC worked alongside civil society and the federal government on the creation and implementation of the Extractive Sector Transparency Measures Act, an anti-corruption measure that puts Canada in a leadership position in the global transparency movement.

MAC has been working to build capacity within the global mining industry. We have published guidance on improving implementation of site-level grievance mechanisms and contributed to the OECD’s guide on stakeholder engagement due diligence. MAC and its members have also undertaken actions in the areas of protecting human rights and supporting community development in host countries. MAC is also an active member of the International Council on Mining and Minerals, an organization dedicated to a safe, fair and sustainable mining industry.

Healthy dialogue continues over the need to ensure that mining projects in the developing world respect human rights, the environment, and public health and safety. As one of the world’s most successful mining countries, Canada has an important role to play in this area. The Mining Security Working Group, a supporter of MAC’s initiatives in promoting respect for human rights, is one organization that recently published a resource providing guidance for developing a Security Management Plan that supports implementation of the Voluntary Principles on Security and Human Rights (VPSHR), and the application of other international best practices.

Recent decades have seen developing countries open up their economies to mineral exploration and development. In the process, Canadian mining companies have encountered challenging circumstances such as weak governance, corruption and poverty.

Standards help companies foster continuous improvement in the ways that they manage risks and fulfil their responsibilities wherever they operate. Many MAC members have proactively applied our Towards Sustainable Mining (TSM) initiative to their operations overseas to ensure they are operating at the same high standard as their Canadian operations. TSM has garnered international attention in recent years, with a growing number of mining associations outside of Canada adopting TSM for their members.

Beyond TSM, our members subscribe to as many as 17 different international standards addressing issues such as human rights, the environment and climate change, labour, anti-corruption and community development.

In recent years, MAC has undertaken significant actions related to human rights. In March 2017, MAC established a new membership commitment related to the Voluntary Principles on Security and Human Rights. In 2017, MAC became an associate member of ResponsibleSteelTM. MAC will bring its experience with TSM and work with the organization to develop the mining component of a new global standard for a responsible steel supply chain.